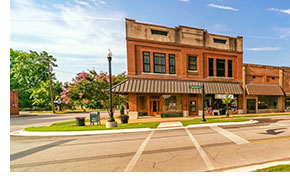 The town square of Athens, AL, boasts a century-old courthouse, bustling restaurants, and a church. Successful events such as a farmers market and a concert series are staged in the historic downtown.

Incongruously, downtown Athens was also home to expansive thoroughfares seemingly designed for high-speed suburban traffic, not for a quaint downtown.

Adding to the hustle and bustle, downtown had traffic lights. That raised the degree of difficulty for motorists backing out of downtown parking spaces — they were constantly on alert for drivers accelerating through yellow lights.

About six years ago, the city’s planning department included a redesign of the downtown streetscape in its master plan. In perhaps the most calming change, downtown Athens’ 85-foot-wide streets were narrowed significantly. At their narrowest point, at pedestrian crossings with bulb-outs, the streets’ width is now just 35 feet, Richardson says.

The new crossings comply with the Americans with Disabilities Act, a feature that didn’t exist before. By shortening the distance that pedestrians share with vehicles, the new streets help visitors and workers feel more at ease while walking through downtown, Richardson says.