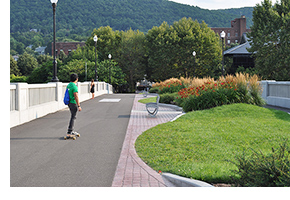 In recent years, Corning, NY, has taken pains to become more pedestrian-friendly. The small city has invested more than $1 million in safety upgrades to two areas with bustling pedestrian traffic.

“The 20-foot distance really opens up the view,” says City Manager Mark Ryckman. “You can clearly see if someone is entering the crosswalk.” That project’s financial cost of about $14,000 was relatively low, but it did require the downtown district to sacrifice parking spaces.

“We probably lost a dozen parking spots,” Ryckman says. “There were a lot of merchants who were very upset. It is a tradeoff.”

On the more costly side were improvements to a pedestrian bridge across the Chemung River. The bridge is now a pleasant open space and attraction in its own right. It boasts benches, plantings and a mini-maze. Ryckman says he often sees people eating lunch or just hanging out on the bridge.